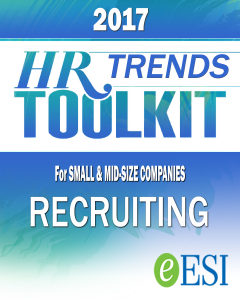 The outlook for 2017 is predominately growth – in the economy and in salaries.  A recent SHRM report forecast a 3.2% growth in salaries.  However, the pool of job applicants is shrinking, which is why so many companies are increasing salary offers.

Those that are not are having a harder time finding top talent.

Amid this tightening job market, there is another dynamic shaping the recruiting landscape: companies are having a hard time finding applicants with the skill sets they need; and, even when they do, they are behind the curve offering commensurate salaries.

Though the unemployment rate is expected to remain in the 4-5% range, there is a problem with ‘under-employment.’  Many of the jobs that have been created are low-wage jobs; higher paying jobs that can support families have eroded, and many of those in this segment do not have the new skills necessary for the jobs that need talent.  This disconnect is making it difficult for companies to find good candidates.

Good candidates, on the other hand, are moving more freely toward higher paying jobs with opportunities for promotion and career growth.  A recent study found professionals prefer promotion opportunities more important than pay.  Tenure, too, is down to 4.4 years – its lowest point in 10 years.

There is no way to calculate, reliably, what a bad hire costs or means to your company, though a common assertion is at least 30% of that employee’s annual salary.  But in addition to direct costs, there are other real costs – lowered productivity and employee morale – that make it important to find and retain top talent.

Here are a few trends helping companies succeed in this competitive recruiting environment.

Video is proving to be more engaging to job applicants, cost-effective, and companies are reporting better hires.  A SHRM article reported on a network of healthcare providers in the Philadelphia:

Main Line Health, a network of hospitals and health care centers in the Philadelphia area with 10,000 employees and 2,000 physicians, uses video to reach multiple job applicants simultaneously. The system allows HR to perform pre-interview screening, assess an individual’s skills, and evaluate who should be invited for an in-person interview by identifying the strongest candidates based on their competencies and experience after comparing responses to a uniform set of questions.

The process saves the employer time and allows job seekers to share their stories when it’s convenient for them. “The use of video interviewing has cut down the many phone calls, messages and e-mails between the recruiter and the candidate,” says Main Line’s Manager of Recruitment Rhonda Barrison. She says the system lets applicants respond via a video link “when they have the availability and privacy to do so.”

One global technology company’s use of video resulted in a 20% increase in hiring capability with the same staff.

A small business in Alpharetta, Georgia was inundated with over 1,000 resumes for an entry-level sales position.  They decided to deploy a video-based system to handle interviews.  The company’s Talent director reported, “I reviewed 1,000 candidates in the time it used to take me to deal with 100 via resume and phone.”

Applicants are using video links to submit video resumes that are much more helpful to a company’s recruiting effort, but companies are also using video to stand out from their competitors, providing short insights to the company’s culture and employees.

Fidelity, the nationwide financial services company, began creating short 30-40 second videos that introduced a position’s hiring manager and co-workers to potential applicants.  The videos were shot on smartphones and distributed in their job posts.  The results were powerful.  Fidelity’s Talent Director, Trish Davis, reported that applicants spent twice as long with the video posts, and that they had far better engagement.

The firm with whom Fidelity worked, reported that applicants are four times more likely to pass a video job posting around.  And, the videos don’t have to be professional; brief and authentic work best.

Chat, too, is growing in popularity.  Reports indicate that 36% of smartphone users use messenging services like Facebook Messenger and What’s App.  These numbers will continue to grow.  Last year, an HR professional in India began a What’s App chat group strictly for HR professionals, and focused on jobs; within one year, six more groups launched, each one containing the maximum number of 236 individuals.

MOBILE-CENTRIC is NO LONGER AN OPTION

If you haven’t adapted your recruiting process around mobile, you are already at a disadvantage.  More people now open emails on their mobile phones than on a desk or laptop computer, especially millennials. In fact, 2016 witnessed mobile communication surpassing laptop and desktop for the first time.  What this means is that recruiting strategies must account for mobile.

In 5 Ways to Use Tech to Drive Hiring, HR consultant Tony Dill explains why mobile adaptation is important:

Many HR departments have not even investigated whether their online job applications function on multiple platforms. An application that’s unusable on a phone or tablet gives off a poor impression, and is less likely to be completed. Conversely, a bright, clean interface that’s mobile-optimized is appealing to millennial talent, and begins building brand loyalty before applicants ever set foot in your offices.

Are your questionnaires brief, reflecting your company’s understanding that a large share of prospective employees will be responding on their smartphones?  If it’s too long, Dill says it will lose you candidates:

Applicants want to see an application that’s brief. Ten questions or less, in fact … Filling out a long application on a mobile device is a hassle. Applicants know they’re going to provide you with a resume and cover letter. They know there will be an interview process. Redundancies feel like time-wasters. And job-seekers are applying for multiple open positions, so while a long application may not seem like a problem to you, and you may even view it as a useful tool to weed out less serious candidates, job seekers’ time is at a premium. 62% of them say your application should take no more than 20 minutes to complete. 60% say they won’t finish an application that’s too long.

Remote and Freelance workers are another strong HR trend.  Intuit, the QuickBooks company, released a report showing that more than 60 million Americans will be working in some form of freelance capacity by 2020 – that’s 40% of the American workforce.  The growth of this demographic is due to the experience and cost-effectiveness freelance workers provide.

Freelance sites like Upwork, Toptal, and collaborative sites like Trello and Slack are making freelance relationships seamless for companies.  Companies save 20-30% with freelance workers on benefits packages, and other assorted costs like office space.  In addition, companies invest in far less training because freelancers are generally adept at their trade or skill.  The freelance trend works well for companies with projects; or, for growing companies that cannot yet afford to hire full-time employees.  The trend is growing, and companies, including small businesses, will do well to investigate freelance options for certain tasks.

Millennials are a unique breed, as anyone that hires them already knows; and, in 3 years they will make up more than 50% of the workforce.  This demographic is mobile-centric, highly concerned about purpose and passion in their work, and, for the first time this year, the largest segment in our population.  Sometimes referred to as the ‘Peter Pan’ generation due to their propensity to avoid ‘growing up,’ these adults born between 1980 and 2000 value ‘humor’ more highly than other demographic groups; and, companies are seizing on that trait in their recruiting.

General Electric has long been known as a manufacturing company, but in recent years they have become global leaders in the development of world-changing technologies.  To overcome the manufacturing perception that was hindering their recruiting efforts, they combined both video and humor into a campaign designed to attract millennials.  It worked – GE’s ‘What’s Wrong with Owen’ campaign received more than 800,000 views, and helped improve their recruiting numbers.

GE’s ability to capitalize on recruiting trends helped them succeed in the tight job market.

Still doing your own payroll? Tasks involved with Payroll and Employee Administration are purely transactional events.

At eESI, our business is all about assisting with the management of any organization’s most valuable resource: people.

A benefit package can be a major incentive to lure the best new talent to your workforce and keep your current employees happy.

Risk is a basic part of business. As a co-employer we work to eliminate, mitigate or share your associated legal liabilities.

eESI continuously utilizes the latest in technological advances through online and mobile solutions to make your life easier.

Still doing your own payroll? Tasks involved with Payroll and Employee Administration are purely transactional events.

At ESI, our business is all about assisting with the management of any organization’s most valuable resource: people.

A benefit package can be a major incentive to lure the best new talent to your workforce and keep your current employees happy.

Risk is a basic part of business. As a co-employer we work to eliminate, mitigate or share your associated legal liabilities.

ESI continuously utilizes the latest in technological advances through online and mobile solutions to make your life easier.