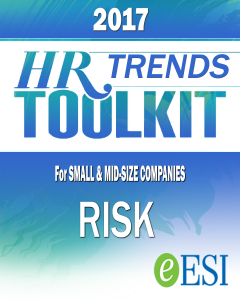 Risk management for small and mid-size companies needs to include cyber security protection. Some experts call it the most important issue this year. OSHA fines and penalties have also increased dramatically in the past year, and preventive strategies, like training, are recommended to avoid injury and lawsuits.

60% of U.S. businesses will experience a breach of sensitive data this year, and 68% of funds compromised by cyber security issues are uncoverable, according to a recent article entitled, 28 Cyber Security Statistics that Will Inspire You (to protect yourself).

In September, Yahoo confirmed that hackers had compromised at least 500 million user accounts, making the incident the largest data breach from a single site in history. On Oct. 18, Yahoo CEO Marissa Mayer stated in a release that she remains confident of Yahoo’s value and ability to keep its users information safe, despite the breach, which analysts believe might thwart the company’s plans to sell its core business for $4.83 billion to Verizon.

Marissa Mayer’s confidence is not warranted: the day we went to publication, Yahoo revealed another breach – its 3rd major security breach in the past 3 years. This time 3.2 million user accounts were compromised. But, it’s not just large companies that are experiencing serious cyber security issues; attacks on small and mid-size firms are escalating, too, to the point one professional hacker called it, ‘the most significant issue for small business in 2017.’

Security breaches can be expensive for companies, according to the Journal of Cybersecurity. The total annual cost of cybersecurity crimes is $8.5 billion, and the cost for an individual company is about $200,000, according to research published in the

journal. The article cites Ransomware, Onion-Layered Security Incidents, and Insider Threats as among those growing in incidence. Heimdal Security reported that 59% of employees steal proprietary company data when they leave.

BitSite, a Security Blog, listed a few cyber statistics that will motivate you to implement cyber security protections.

Below, we’ve selected a list of 6 Cyber Security steps that can help protect you immediately.

The National Cybersecurity Alliance offers free security checkups and tools that may be useful for smaller companies that do not have dedicated security teams.

Government organizations are now holding companies accountable for security breaches. One hospital in Texas was fined 3.2 million for HIPAA violations, and Memorial Hospital in Florida was fined 5.5 million for repeated violations.

Protecting client, customer and employee information is more important for all companies in 2017. You may want to evaluate the suitability of cyber insurance, too.

In addition, Smith adds that OSHA has added new rules. It is already required that work-related fatalities be reported within eight hours. In 2017, the following incidents now need to be reported by covered companies with 24 hours:

What are the most common OSHA issues? Neil Wasser, an attorney with Constangy, Brooks, Smith & Prophete in Atlanta, in the SHRM article, cites the following:

In addition, in October 2016, OSHA published its own Top 10 list of violations, which it considers a starting point for business safety.

Some PEOs can conduct a Risk Assessment and provide employee training in these areas.  Creating and communicating a ‘safety policy’ is a good idea for all companies.

IF YOU HAVE RISK-RELATED QUESTIONS,