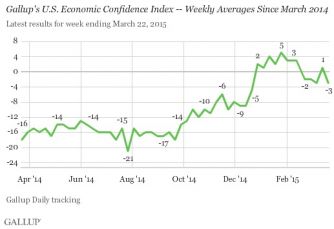 TLDR: Consumer confidence fell less than forecast in March, capping the best quarter since 2004 as the labor market stayed strong and gasoline prices leveled off.

Consumer sentiment continued to deteriorate this week. First, Gallup’s economic confidence index fell to -3, erasing the prior week’s gain as outlooks on both current and future economic conditions dipped back into negative territory. Elsewhere, the final March reading on the University of Michigan and Reuters consumer sentiment index came in at 93.0, up from the preliminary estimate of 91.2 but down from 95.4 in February. This is the first time since 2013 that the index has dropped two months in a row. Much of the weakness was due to growing consumer concerns that household finances are worse now than they were compared to five years ago. Further, an increasing number of surveyed Americans said that now is a “bad time” to purchase a house or a car. Bloomberg continues with more on the release, “The median projection in a Bloomberg survey of economists called for 92 after a preliminary March reading of 91.2. The average from January through March was the highest since the third quarter of 2004. Much of the drop in confidence was among lower-income households, the ones most affected by rising utility bills after colder weather the month before. At the same time fuel costs have steadied since early March, and employers are adding workers following the strongest labor-market performance since 1999. “Gasoline prices have topped off, that’s uplifting sentiment,” Brittany Baumann, a New York-based economist at Credit Agricole CIB, said before the report. “The labor market is continuing to strengthen. We’re expecting confidence to keep improving.” … The Michigan sentiment survey’s current conditions index, which takes stock of Americans’ view of their personal finances, cooled to 105 from the prior month’s 106.9 in February. The measure of expectations six months from now decreased to 85.3 from 88. … Americans expect the inflation rate in the next year will be 3 percent, compared with 2.8 percent in February, according to the University of Michigan’s report. Over the next five to 10 years, they expect a 2.8 percent rate of inflation, compared with 2.7 percent in the previous month…”