News
You are here: Home1 / News2 / Uncategorized3 / Digital Advertising Is Surging With A Growing Focus On Mobile 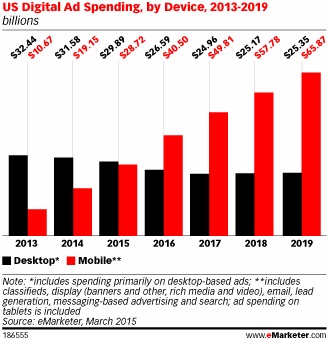 Businesses continue to pour money into digital advertising. For example, in 2013 digital ad spend in the U.S. totaled just over $43 billion but eMarketer expects that figure to climb to nearly $60 billion by the end of this year. In fact, eMarketer forecasts that total digital ad spend in America will surge to roughly $90 billion by 2019 (first chart). However, underneath the headline figures there is a clear trend developing in where businesses are concentrating their digital advertising budgets. Specifically, desktop-focused advertising, e.g. traditional computers, should continue to taper off over the next few years while mobile-related investments should accelerate sharply. Moreover, eMarketer sees mobile accounting for nearly three-fourths (72.2 percent) of total U.S. digital ad spend in 2019, a significant increase from 24.7 percent in 2013 (bottom chart). More from the study, “At the format level, mobile display dollars will continue to increase, outpacing mobile search. In 2015, US mobile display ad spending will reach $14.67 billion, compared with $12.85 billion for mobile search. Through 2019, both display and search will increase at a similar rate, with display widening the gap slightly by virtue of growing from a higher base. By the end of our forecast, mobile display ad spend will total $33.90 billion, while mobile search will be $28.41 billion. It’s important to call out the “other” category as well, which includes classifieds, email and lead generation, among additional formats. US mobile ad spending on those formats will increase from $962 million this year to $3.32 billion in 2019. Meanwhile, mobile messaging ad dollars will rise in 2015 and 2016 before going on a slow decline through the remainder of eMarketer’s forecast period. … Advertisers are finding compelling opportunities through video, rich media and native in mobile apps, as well as a better ability to target captive audiences. Next year, when mobile spending will surpass advertising on the desktop for the first time, app ad dollars will continue to gain steam, increasing 42.6% to nearly $30 billion, or 73.2% of all US mobile ad spending…”