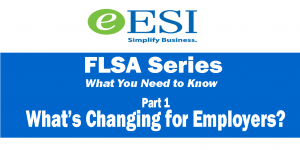 This final rule largely reflects the changes outlined in the proposed rule that was issued on June 30, 2015. These new requirements will have a large impact on employers, since it will require them to review employees’ exempt status, update overtime policies, notify employees of changes and adjust payroll systems—all of which could result in higher administrative and payroll expenses.

Employers must comply with the new rule by Dec. 1, 2016. Given the significant impact this change could have on your company’s bottom line, it is important to start examining your payroll records and re-evaluating your overtime policies now in order to avoid compliance penalties in 2017 and beyond.

PART 1: What is Changing for Employers?

The FLSA requires that eligible employees be paid time and a half for all hours worked over 40 in a workweek. However, overtime rules do not apply to certain “white collar” workers, like executive, administrative, professional, outside sales, computer employees and some highly compensated individuals—these are known as the white collar exemptions. To qualify for a white collar exemption, an individual must pass a salary test, a salary level test and a duties test.

The DOL decided to revise the “white collar exemptions” provided by the Fair Labor Standards Act (FLSA) due to concerns that they were outdated, since the salary thresholds have only changed twice in the past 40 years. For instance, in 1975, more than 60 percent of salaried workers were eligible for overtime pay. Now, only 8 percent of full-time, salaried workers qualify for the exemption due to inflation.

The final rule would also increase the $100,000 salary level for highly compensated individuals to $134,004 per year—the 90th percentile of full-time salaried workers nationally. In order to prevent salary thresholds from falling behind in the future, the final rule requires that the minimum salary level requirements for the white collar exemptions will be updated as outlined below: 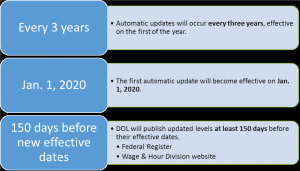 We hope this informative FLSA Overtime Rule brief on ‘What is Changing’ is helpful to you.

If you have additional inquiries about FLSA and its impact on your company – testing, look back periods or implementation practices – we invite you to schedule a free consultation with one of our Benefits Managers @ [email protected]

Next Session: Tomorrow we will be covering “How the new FLSA Rule Affects Bonuses & Incentive Payments.”