News
You are here: Home1 / News2 / Uncategorized3 / How Taxes Get In The Way Of Entrepreneurship 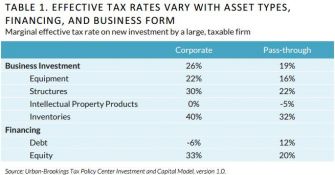 TLDR: Taxes create a wedge between what a new venture earns and what investors receive, boosting the hurdle rate that must be met in order to attract funding.

Over the past year we’ve looked at several factors behind the long-term downtrend in business formation in America. Continuing on this subject, we today look at a new report from The Tax Policy Center and the Kauffman Foundation on how taxes affect entrepreneurship. Specifically, the researchers took the various features of the U.S. federal tax code, e.g. rates, deductions, credits, special provisions, etc., and combined them into a single measure they called the marginal effective tax rate (METR). The METR was found to have a significant effect on the hurdle rate of startup investment. For example, a 20 percent METR implies that an entrepreneur would have to generate a $1.25 pre-tax profit just to return a $1 return to investors. Such hurdle rates therefore lessen the incentive for people to invest in new businesses and thus highlight the need for tax reform in this country. More form the report, “Structure matters. C corporations face two layers of tax, one on the company and one on owners; partnerships, LLCs, sole-proprietorships, and other “pass-throughs” face only the owner layer. Pass-throughs thus enjoy a significant advantage: a 19 percent METR on new investments, on average, versus the 26 percent on C corporations. The tax code favors debt over equity. Corporations can deduct the cost of any interest they pay on bank loans, debt, etc. But they can’t deduct dividends or other payments to owners. That tilts the playing field sharply in favor of debt. In C corporations, for example, a (hypothetical) investment financed completely by debt is actually subsidized by the tax code, with an METR of -6 percent, while investments completely financed by equity face a rate of 33 percent. The tax code plays favorites. Uncle Sam favors investments in equipment, software, and intellectual property over those in structures and inventories. That’s good news if your venture is in R&D- and equipment-heavy industries; chemical and pharmaceutical firms, for example, face a METR on their investments of only 11 percent. If you are launching a wholesale or retail business, however, the news isn’t so good; investments in those industries face average METRs of 31 percent. Startups often can’t make full use of tax breaks. The figures we’ve mentioned thus far are for companies that are profitable and thus pay full taxes on their profits and get full credit for any expenses or deductions. Startups often make losses, however, and thus cannot make immediate use of the R&D tax credit, accelerated depreciation, and other tax benefits. The value of those tax breaks declines the longer companies have to wait to use them. (Existing companies can often get credit for losses against prior taxes paid.) In addition, companies often lose unused tax deductions and credits if they get acquired or do a big equity financing. These limits can drive up the METR facing new businesses sharply. The impact is most pronounced in R&D-heavy industries, where METRs can easily double…”