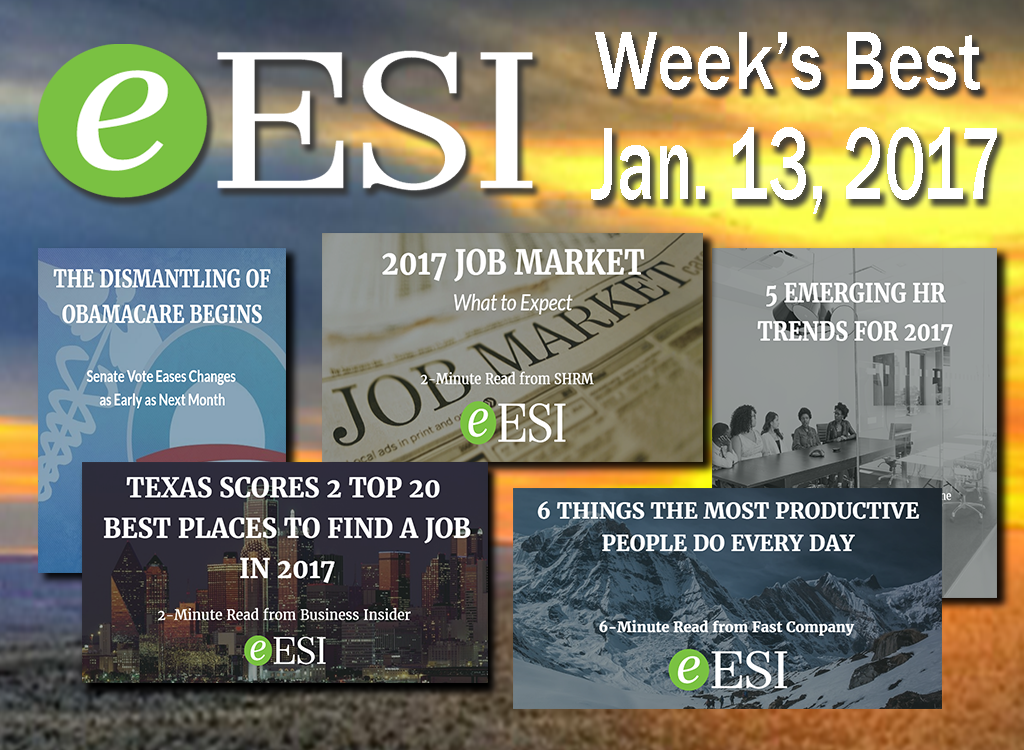 The inauguration hasn’t even taken place yet, and the legislative battles have begun in Congress.

Senate Republicans began the process of dismantling Obamacare by passing a budget resolution that will prevent a democratic filibuster – that story in the Chicago Tribune.  What will they replace it with ?  No one yet knows – stay tuned.

What Can You Expect from the Labor Market in 2017?  SHRM posted an article that posits continued growth, especially in certain industries. Read the article to find out which ones … and, Texas landed two of the Top 20 Best Cities to Find a Job in 2017, a trend article from Business Insider …

In HR, Steve Boese of HRExecutive Online posted an article about the Top 5 Emerging HR Themes for 2017; AI and Employee Experience are two of the themes; perhaps you can guess the others … Don’t forget that January 31 is this year’s deadline for submitting W2 forms.  You’ll find details in our eESI post  … and, SHRM reported that Texas’ Lt. Governor launched a ‘bathroom bill’ that will require transgender individuals to use the bathroom of their birth gender – this fight should continue throughout 2017.

In Productivity, it was a banner week … Inc’s Minda Zetlin posted, ‘Want a Lifetime of Better Brain Function?  Change this One Habit’ … Inc. also posted a brief video (1:09) from author, speaker, and productivity guru, Tim Ferriss, entitled ‘One Key to Accomplishing All Your Tasks in 2017‘ – a good video backed by scientific research … and, Fast Company published ‘Why the Most Productive People Do These 6 Things Daily – a simple, but helpful review and summary.  The article is one of the better productivity reads this month.

The inauguration of President-Elect Donald Trump takes place next Friday, January 20; Senate confirmation hearings are already taking place on his nominees for the country’s top posts; and, President Obama issued his farewell address this week in Chicago.  2017 promises to be an eventful year …