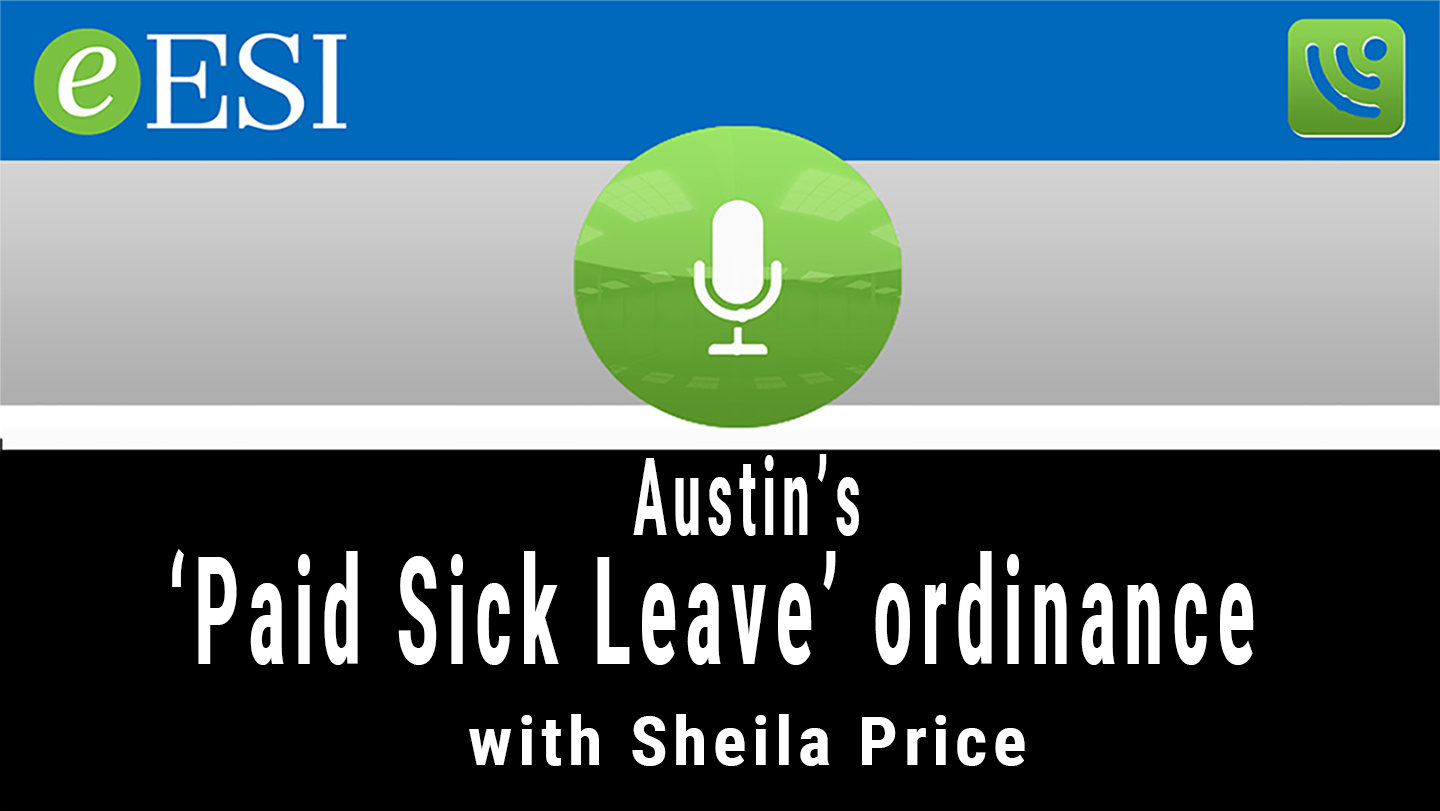 Though the amount of annual paid sick leave, and the implementation dates vary according to company size, the ordinance impacts every employer in these areas.  Originally scheduled to begin for some companies on October 1, 2018, the ordinance faces stiff challenges from the business community and the legislature.  Last week, an appellate court blocked the ordinance until the legal challenges are resolved.

In this brief podcast, we talk with eESI HR professional Shelia Price, who explains the ordinance, its impact on employers, and the its current legal status.

Two cities in Texas, Austin and San Antonio, have now passed paid sick leave ordinances which, if allowed to stand, would require many local businesses in those municipalities to provide their some of their employees with paid sick leave. Delivering the details in State appeals court temporarily blocks Austin’s paid sick leave ordinance, Emma Platoff of The Texas Tribune reports that Austin’s ordinance was the first of the two, enacted on February 15, 2018.

With a tiered rolled out, the Austin ordinance was scheduled to go into effect beginning October 1, 2018, for businesses with 6 or more employees and in 2020 for smaller businesses. However, as SHRM’s Allen Smith explains in Austin Paid-Sick-Leave Ordinance Temporarily Suspended,  the ordinance is now on hold as a legal challenge to the legislation works its way through the Texas state court system.

Austin and San Antonio aren’t the only two Texas cities heating up the paid sick leave debate. A petition-driven in Dallas this summer sought to place a similar ordinance on the November 2018 ballot. The details of that effort are described in Petition To Put Paid Sick Leave In Dallas On Ballot Fails; Group Demands Recount.

What does all this mean for small businesses in Texas? For now, the ordinance is on hold but business owners should remain prepared to implement new sick leave policies to comply with the law if it is eventually upheld. In the meantime, if you have any questions about the status of the ordinance or whether it will apply to your business, please give us a call here at eESI at 210-495-1171.

Or, download our free ‘Austin Paid Sick Leave‘ overview.  At eESI, we’re here to ‘simplify business’ for you.

eESI Podcast: Benefits Renewal Season is the Perfect Opportunity for Your Business to Offer More Options to Employees

Have You Heard? eESI’s HR issues for small businesses podcast series is a summer hit