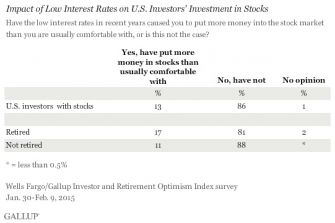 Most of the incoming reports on the economy have disappointed expectations in recent months and analysts both at the Federal Reserve and on Wall Street have responded by revising their estimates for first quarter U.S. gross domestic product (GDP) growth sharply lower. Despite these near-term headwinds, the future for the economy remains bright and it is widely believed that the Fed will soon have to start raising the discount rate. Even consumers feel this way, evidenced by the new Gallup poll which found that a majority of surveyed investors believe that interest rates will rise over the next twelve months. Five percent expect rates to go up “a lot” and only 7 percent see rates falling over the next year. Such outlooks were shared by both retired and non-retired respondents. How could a rising interest rate environment affect financial planning? ThinkAdvisor explains, “What will a rate increase mean for current retirees? “Retirees in general ought to be more risk-averse, and a rate increase would only exasperate that need to shift money into safe money positions,” said Dan White, President of Daniel White and Associates. With a correction in site, few retirees will want to maintain significant holdings in an already volatile market. Even a small rate hike could also bode poorly for seniors big on bonds. “Anyone with a big bond portfolio needs to know that as interest rates go up, you’ll have falling bond prices,” said O’Dell. Clients who still have a decade or more to work may have a shot at higher-yield bonds if the market normalizes before they retire, but current retirees shouldn’t bank on it. Over the next year, and particularly as the Fed begins to solidify its plans, retired clients will need to move some of that money into other securities to offset the price drop. Fortunately, those other securities may see an uptick. “The interest rates you receive on that money in CDs and other fixed-type accounts are going to go up,” said O’Dell. “Raising interest rates is going to help us make money on our savings accounts.” Ultimately, clients who move money from bonds to CDs and high-yield savings accounts may actually improve their net worth and portfolio longevity. As for seniors five to ten years out from retirement, a rate hike would likely affect them in similar ways – particularly in regards to their market holdings. … For middle-aged and younger clients, however, it may be best to just stay the course with market-based investments…”