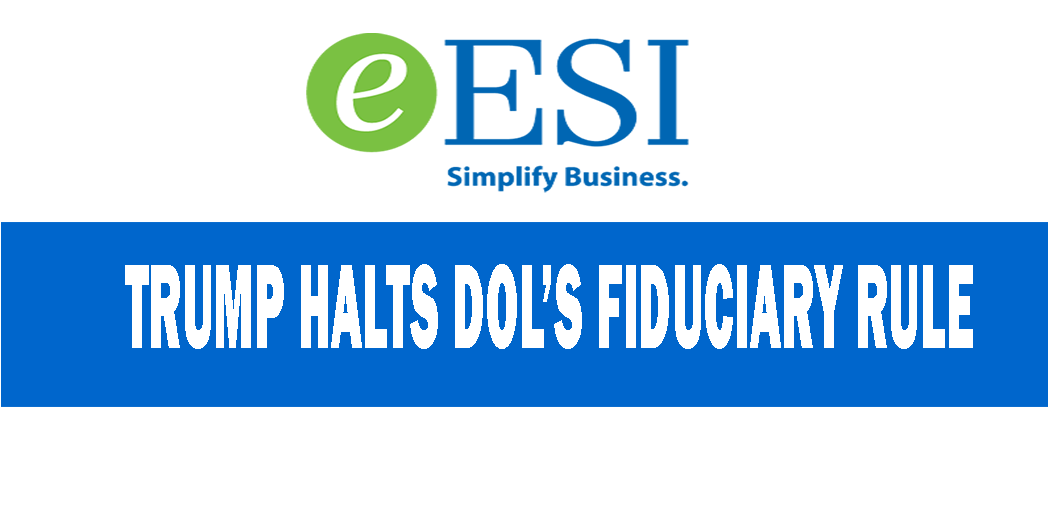 The U.S. Department of Labor (DOL) has been directed to postpone and reexamine the fiduciary rule on investment advice that was scheduled to take effect April 10, under a memorandum signed February 3 by President Trump.

“The rule is a solution in search of a problem,” and the DOL exceeded its authority by issuing it, White House Press Secretary Sean Spicer said in a briefing. “The rule’s intent may be to have provided retirees and others with better financial advice, but in reality, its effect has been to limit the financial services that are available to them.”

The memo directs the DOL to “examine the Fiduciary Duty Rule to determine whether it may adversely affect the ability of Americans to gain access to retirement information and financial advice.” This must include an updated economic and legal analysis that takes into account whether the rule:

If the DOL finds any of these to be the case, the agency is to commence a rulemaking to revise or rescind the fiduciary rule.

The U.S. Chamber of Commerce praised Trump’s action. “The flawed fiduciary rule’s rushed implementation would have jeopardized access to retirement advice and choice while its severe consequences and compliance burdens would have made it harder for small businesses to offer retirement plans,” Chamber CEO Thomas Donohue said in a statement. “Now, we look forward to swift action from [the DOL] in putting this delay into effect and reevaluating matters of policy and law.”

However, the Consumer Federation of America (CFA) called the order a rollback of needed protections. “If [the DOL] follows through on this threat and delays and repeals the rule, brokers and insurance agents will be free to go back to putting their own financial interests ahead of the interests of their clients, recommending investments that are profitable for the firm but not the customer,” CFA stated. “And they will be permitted to do all this while claiming to act as trusted advisers.”

The fiduciary rule, finalized in April 2016, has long been controversial. It is of particular concern to the financial services sector, but its expansion of ERISA’s fiduciary duties raises liability concerns for plan sponsors as well. The upcoming compliance deadline has made it important for them to take stock of the affected fiduciary activities that they, or their service providers, might be performing—as well as updating contracts with plan service providers and looking over their communications with plan participants.

FIDUCIARY PROTECTION IS VITAL FOR BUSINESS OWNERS WITH A 401K

THE eESI 401K PROVIDES THE FIDUCIARY PROTECTION YOU NEED – AND, 6 ADVANTAGES OVER MOST 401K PLANS.

September 20 – The Impact the Presidential Election Could Have on Healthcare