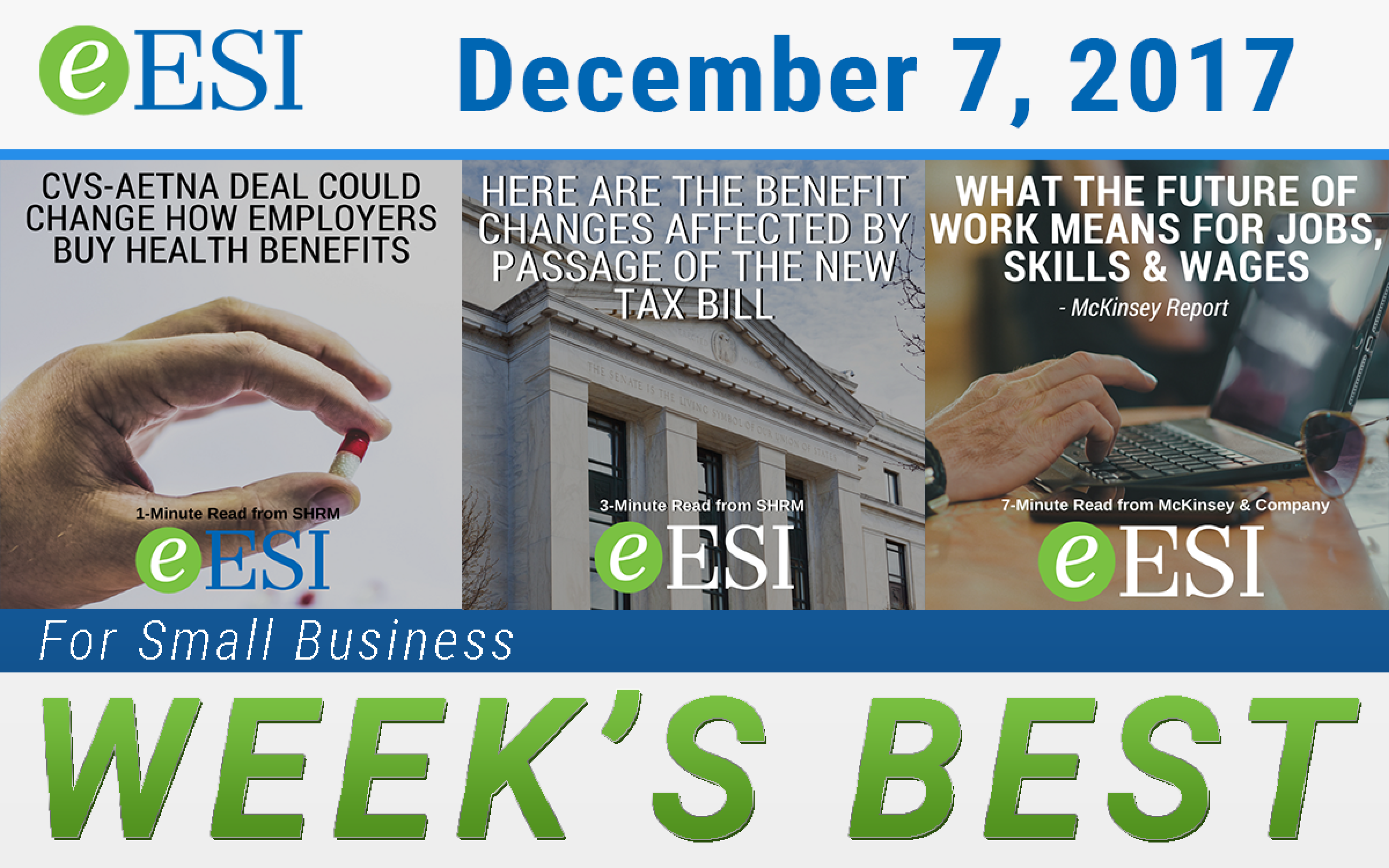 eESI Week’s Best for the week ending December 8 includes a look at McKinsey’s predictions for the future of work. We also consider the impact of the CVS-Aetna combination on employer-sponsored health benefits. In technology news, another security flaw–this time in banking. Plus, we share a forward looking article on tech trends for 2018.

The end of a year is often a time for both reflection on the past and gazing into the future. This week, we’re sharing McKinsey Global Institute’s forecast on What the future of work will mean for jobs, skills and wages. The number one takeaway? Automation is going to change many careers in the coming years.

In Senate Passage of Tax Bill Signals Benefit Changes- But Which Ones?, SHRM’s Stephen Miller explains which work-related deductions and credits will change and which will stay the same. Because the House and Senate bills differ on a few of these issues, Miller gives us the play by play for each.

On Thursday, Congress passed a last-minute continuing resolution to keep the government funded and running until December 22. Fox News reports the details of this in the nick of time budget move in Congress passes bill to avert government shutdown, setting up pre-Christmas showdown.

When health insurers and pharmacies collide.

The owner of one of the largest pharmacy chains in the U.S. may be getting into the health insurance business as CVS Health Corp. announced its plans to purchase Aetna, Inc. Stephen Miller considers how a CVS-Aetna Merger Could Change How Employers Buy Health Benefits in his December 6 article for SHRM.

Banking via app may be risky business.

The apps of these major banks were found to have security flaws reads a December 7 MarketWatch headline. News of the vulnerabilities was shared by researchers from the University of Birmingham at this week’s 33rd Annual Computer Security Applications Conference in Orlando. Several of the named banks issued statements indicating that the detected security flaws have been resolved, reports MarketWatch’s Maria Lamagna, but you might want to see what they were just the same – makes you wonder what’s going on now …

Forbes’ contributor Bernard Marr shares his predictions in 9 Technology Mega Trends That Will Change the World in 2018. What can we look forward to? More data, more automation, and new uses for 3D and blockchain technologies.

Snow in Texas!  Just in time for this holiday season.