News
You are here: Home1 / News2 / Uncategorized3 / LABOR AND EMPLOYMENT UNDER THE TRUMP ADMINISTRATION: What We Know, What... 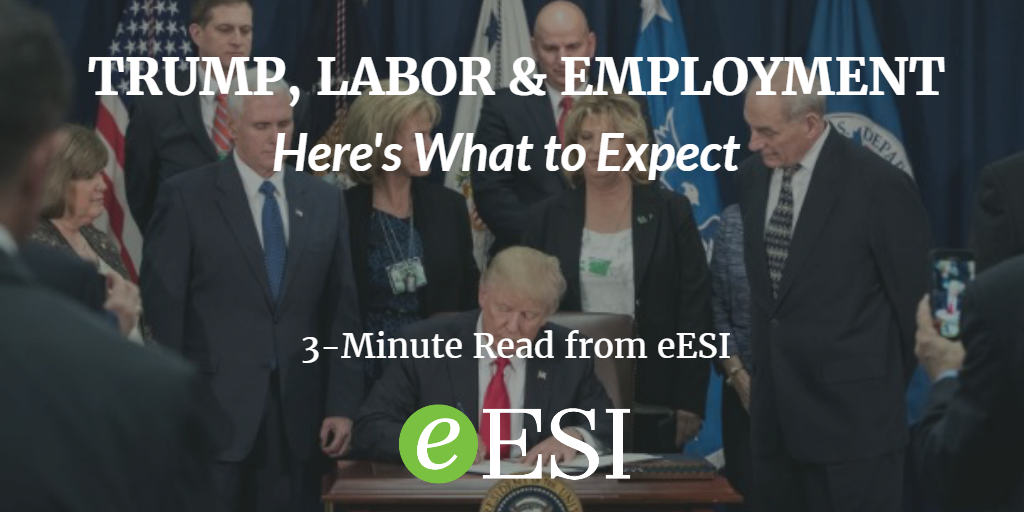 Labor and Employment Under Trump: What We Know, and What’s Ahead

On January 20, 2017, Donald J. Trump was sworn in as the 45th president of the United States. Employers have been carefully monitoring the transition to get a sense of how the incoming administration will approach labor and employment issues. Since the inauguration, here’s what we know so far and what we expect in the coming days.

Because Republicans will control the White House and both chambers of Congress, President Trump seems well positioned to pass his initiatives and get his nominees approved. A number of observers expect that under a unified Republican government, the incoming Congress will take a more affirmative role in creating legislation and enacting laws than we have seen over the past 8 years.  Nevertheless, because the Republicans lack the 60 votes needed in the Senate to break a filibuster (they hold the chamber by a margin of 52 to 48), Democrats will retain some leverage over policy matters and approval of Trump’s nominees. It also remains to be seen whether individual Republicans will break ranks and pursue independent political objectives to show autonomy or perhaps advance their own personal agendas. On the other side of the Capitol, the House Committee on Education and the Workforce, which has a significant impact on labor and employment matters, will no longer be headed by John Kline (R-Minnesota), who is retiring. He will be replaced by Representative Virginia Foxx (R-North Carolina). Because her background is primarily in education, Foxx has indicated that she will be looking to fellow committee member Bradley Byrne (R-Alabama) for his expertise and guidance on labor issues.

We expect the incoming administration to focus on job creation—a central theme for Trump during his campaign and one that he continues to stress. To that end, we anticipate that the Trump administration will scrap what it perceives to be “job-killing” Executive Orders (EOs) and regulations passed by the Obama administration, notably EO 13673, the Fair Pay and Safe Workplaces order, also known as the “blacklisting” EO. It’s less obvious whether EO 13672 (adding LGBT protections to EO 11246) and EO 13706 (establishing paid sick leave for federal contractors) will be rolled back. It’s possible that the administration may take a middle-ground approach by leaving the LGBT protections in place but establishing a religious exemption for employers. And while paid leave for contractors may be regarded as an unnecessary burden on businesses, the administration has shown interest in developing comprehensive paid-leave programs. Similarly, Trump campaigned on the promise of regulatory reform. For example, he stated that he would require each federal agency to prepare a list of all regulations imposed on businesses and rank them from most to least critical, with the latter being considered for repeal. He also indicated that for every new regulation passed, two would be repealed. We fully expect the U.S. Department of Labor’s (DOL) union persuader rule and new Fair Labor Standards Act (FLSA) overtime rule to be repealed, although the way that will be done is anyone’s guess. The new administration may simply stop defending the pending legal challenges to both regulations and allow a court to enter an adverse judgment. Alternatively, Congress may invoke the seldom-used Congressional Review Act, or a formal rulemaking may be issued to undo the regulations.

Changes in Leadership and Direction of Key Agencies DOL.

On December 8, 2016, Trump announced that he would be nominating fast-food executive Andrew Puzder to be his secretary of labor. Given Puzder’s substantive legal and Page 3 of 4 Simplify Business. business background, he’s well acquainted with the DOL and has a long-standing interest in issues affecting employers. Puzder is a vocal critic of a $15 federal minimum wage and expansive interpretation of the jointemployer doctrine. He’s also in favor of temporary legal immigration to fill lower-wage jobs, primarily through the H-2B visa program. While no nominee for deputy secretary of labor has been announced, one person who has been getting attention is Patrick Pizzella, a member of the Federal Labor Relations Authority (FLRA). It’s also rumored that Tammy McCutcheon, the administrator of the DOL’s Wage and Hour Division (WHD) under President George W. Bush, is being considered for solicitor of labor. At press time, it is unclear when Puzder’s confirmation hearing will be held. OFCCP. Following the departure of Director Patricia Shiu in November, the Office of Federal Contractor Compliance Programs (OFCCP) is currently headed by Thomas Dowd. We don’t anticipate any significant agency activities during this interim period, such as corporate scheduling announcement letters (CSALs) being issued. In response to a recent blistering assessment of the agency by the Senate Appropriations Committee, we expect to see the OFCCP adopting a more reasoned approach to asserting systemic claims and conducting audits. EEOC. President Trump has chosen Victoria A. Lipnic to serve as acting chair of the U.S. Equal Employment Opportunity Commission (EEOC), the agency announced on January 25. She will replace Jenny Yang as chair, but Democrats still will retain a majority on the commission for some time. NLRB. Trump will be able to fill two empty seats on the National Labor Relations Board (NLRB), and it’s likely that he will elevate Philip Miscimarra to chair. Significantly, he will also name the new NLRB General Counsel to replace Richard Griffin, Jr., who championed a prounion interpretation of the National Labor Relations Act (NLRA). Griffin’s term doesn’t expire until November 7, 2017, but it’s possible that he will step down earlier. We expect the incoming administration to reverse course on numerous labor-friendly rulings and interpretations by the NLRB, including those governing “ambush elections,” the joint-employer doctrine, class-action waivers, and Section 7 rights in nonunion workplaces touching on confidentiality and employment policies.

As mentioned above, we expect the DOL under Puzder’s leadership to eliminate the moribund overtime regulations promulgated by the Obama administration. Nevertheless, there’s a consensus that the current $23,660 salary threshold for exempt employees under the FLSA is on the low side. We may see that figure undergo a change based on a cost-of-living adjustment. We may also see a return to the WHD’s practice of issuing opinion letters to businesses based on individualized queries instead of issuing broader administrator interpretations. It is reported that a leading potential nominee for administrator of the Wage and Hour Division is Alexander Passantino, who formerly served as acting administrator of the agency during the George W. Bush Administration.

Finally, we expect the Occupational Safety and Health Administration (OSHA) to emphasize voluntary compliance and training programs and move away from the heavy-handed enforcement that marked the past 8 years.

Paid Leave, Equal Pay, and Other Potential Areas of Focus Throughout the Campaign

Trump’s daughter Ivanka championed paid maternity leave, lower childcare costs, and equal pay. She is recognized as a major force behind her father’s plan to guarantee 6 weeks of paid maternity leave and make childcare expenses tax-deductible. In light of a mounting wave of state and local laws addressing paid sick leave, family leave, and fair pay (notably in California, Maryland, Massachusetts, New York, and the District of Columbia), we may see corporations request a uniform set of standards from the federal government that will ease their compliance burdens. Trump has repeatedly stated that he wants to repeal and replace the Affordable Care Act (ACA)—a sentiment shared by Tom Price (R-Georgia), his nominee for secretary of the U.S. Department of Health and Human Services (HHS). After meeting with President Barack Obama, however, Trump said that he would like to retain two key provisions of the ACA: requiring coverage of preexisting conditions and allowing adult children to remain on their parents’ insurance until age 26. It remains to be seen what type of program will replace the ACA.

With so many uncertainties ahead, we’ll be keeping a close eye on the impact of the Trump presidency on labor and employment law. Stay tuned.

An HR.BLR.com article, Used by Permission.