News
You are here: Home1 / News2 / Uncategorized3 / The Power of Sincere Praise in Employee Performance 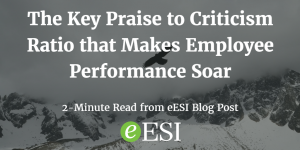 5.6 to 1 – that is the magic formula.  Why is that number important?  According to Harvard Business Review, it represents the ratio between sincere praise and criticism in companies with high performing teams.  And, that number is stark in its contrast with average or low-performing teams.  In this job market, where one sits on that praise to criticism scale can make a significant difference in a company’s bottom line.

The Job Market is tightening and employees are leaving jobs quicker than at any time in recent history, according to a recent article in SHRM:

The Bureau of Labor Statistics (BLS) announced that median employee tenure—the length of time a worker has been with his or her current employer—was 4.2 years in January 2016, down from 4.6 years in January 2014. It’s the first dip recorded by the biennial survey since 2000.

“The recent drop reflects two signs of labor market strength,” said Jed Kolko, chief economist at job search engine Indeed, based in Austin, Texas. “More people are getting hired, which lowers median tenure since they’re new on the job, and more people are voluntarily quitting jobs, which is a sign of their confidence in the economy and their odds of finding a new job.”

Combine the SHRM findings with the results of a recent CAP study (Center for American Progress), which revealed that the economic hit for a company losing a $40,000 a year middle manager is between $20,000 and $30,000, and it is easy to see that employee turnover is a very costly problem.  But the ‘hit’ a company takes is not just financial.  SHRM, in a separate article, cited Josh Bersin of Bersin by Deloitte who outlined additional problems companies face when an employee leaves – from lost engagement to company culture.

So, how do you keep and nurture your best employees? There are several excellent ways, but one of the best is by improving one’s sincere praise to criticism mindset.

In 2013, the Harvard Business Review post found that the highest performing business teams also had the best praise to criticism ratio:

Recent articles in Inc magazine about the 12 Most Common Habits of Bad Bosses (the Fail to Recognizer Boss), and the 12 Ways to Keep Your Best Employees from Bolting (Recognize and Praise High Performance Often) ; and, an article in SHRM about 7 Simple Ways to Improve Employee Engagement (Recognize Proudly and Loudly), show that HR journalists, and the consultants they cite, agree.

Experiments conducted on married couples and families found the same result: families and marriages where sincere praise outperformed criticism 5 to 1 were the strongest, healthiest and happiest.

The problem, it seems, is that where we undertake to change what we say to others, we find the issue is really in how we see things – the parent who notices what’s not picked up, rather than the one who sees what is done correctly; the boss who comments on what needs to be improved, or communicates disapproval frequently through words, actions, facial expressions, versus the one who communicates frequent approval for work done well.  Too many times, we ‘expect’ certain things and only notice what is not ‘up to expectations.’  A good boss and a healthy business or family environment notices both – and the praiseworthy five times more than the negative.  Critical parents raise insecure and critical children, no matter their success level; critical bosses are more prone to lose their best employees and hurt their own bottom-line.

When the job market is tight, and employees have greater options, it’s simply good business to consider wisely what we choose to ‘see’ and communicate.

HIRING WELL IS VITALLY IMPORTANT, ESPECIALLY IN THIS JOB MARKET.

CONTACT AN eESI HR BUSINESS PARTNER TO HELP YOU FIND THE ‘RIGHT’ HIRE AT HR@eESIpeo.com